skip to main | skip to sidebar

Having started making blankets for others, it was inevitable that the boys would want to have their very own blankets for themselves. Mind you, these boys probably have a million blankets in total already. Not good enough. They wanted one of "mommy's latest and greatest". Well they do happen to be the sweetest little boys on the face of the Earth so of course I obliged them. Evan's was actually very easy and I finished it off in under a week.

And for doing so, I heard, "you love Evan more". *Le Sigh*
Promptly, of course, I began to make Conner's. Well, not only was his more labor intensive, but my 40th birthday came and went, as did the 4th of July, so we were busy. I could not just sit and work on it non stop. The topper to that was he wanted this blue 'fuzzy' yarn on his that was a huge pain in the rear to work with. Last night, before he fell asleep, I finished. 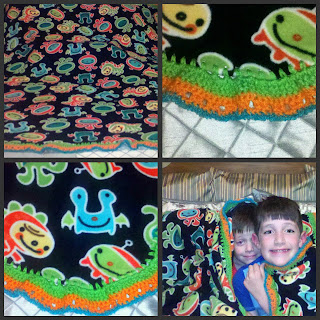 Upon being bundled in it, albeit it on an 80 degree night, he said with as much love as he could muster, "I will be wrapped in your love every night and I will keep this until High School, AFTER High School even!" And in an instant, I had melted.

Being a mom is everything it is cracked up to be and more.
Posted by Mrs. Dad at 8:16 AM

Mrs. Dad
Michael and I have been married close to 14 years. We have two beautiful little boys age 6 and 8. We CHOSE to move from Westlake Village, CA to Draper, UT so Michael could become a stay at home dad. Now despite how things read we adore each other and our kids. No we do not say the F-word in front of them. We are good loving parents. However, our life is funny as hell. To us, that is. I am a former actress and Michael well, he is just a nut job in Greek packaging. Enjoy!